my life next to an opel

When I was 9 years old my parents met some friends where he worked in Opel, from there I always wanted to work in Opel like this man, and enroll in cars, I came from my father's nova A, and he already told me that as a baby he had nights when my parents came home, it was to turn off the nova and start crying, and without stopping there was only one way to shut up, turn on the nova, my father still remembers all this

When I was 9 or 10 years old, in 2001, my father wanted to retire the nova, and he began to look at ibizas, xsaras, fabias ... cars of the range, and I got the corsa, which I had to continue with opel and others , and asked for a budget for the corsa C 1.7DI club, in the workshop where my parents' friend worked, in opel, the dealership was AUTOS MIÑOR, which has already closed, and commissioned the club, my mother got in to ask for the DTI, and ended up ordering the DTI comfort, from there, I remember that afternoon at 6 where they called us that he was ready to take it from the conce, and go to collect it all, when we arrived it was in the window, in the middle of two, on the nose waiting for us

my father always liked the lucky luke series, and he called this car rantamplan, after the dog of the series, as an anecdote

first accident
One afternoon, when I was 17, standing in a give way, a C-class Mercedes driven by a non-braking drunk, and we got completely behind, when we got down and saw the Mercedes with the broken nose, we thought the worst, we looked at the corsa and bruised fender, the boot scratched a finger, and nothing else, in the new fender shop paint boot and ready

second accident
At the age of 18, I saw my dream come true, my father ordered a Toyota in 2009, I at 18, a fresh license, with a girl by my side, and accepted to study FP in car mechanics, one night a few days after The toyota arrived, my father was driving out of class, in a traffic light an a4 b5 crashes behind us, when getting off a boy tells us that he thought we were going to skip the traffic light and accelerate without more, smashed defense, hole where the wheel of spare bent a little, workshop, fender fixed, wheel well to straighten, car ready

the toyota arrives
The corsa is mine, MINE, finally, the stories end and I only take it, my first car at 8 years old and 123k, all standard, studying something that I liked ... life on track 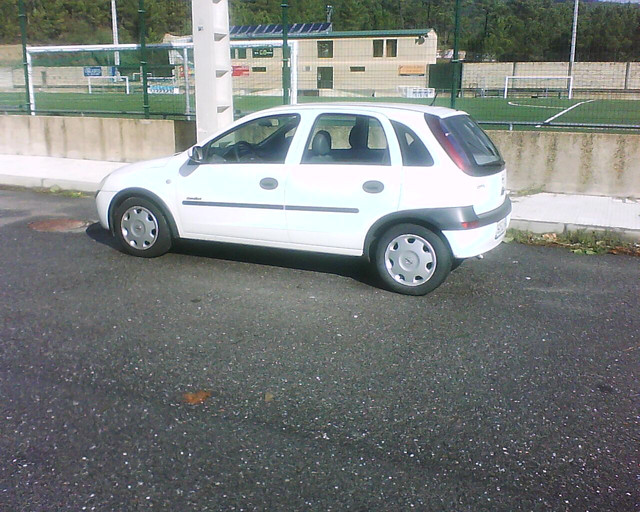 After a while I went wrong with a Spanish corsa forum, a women's issue, and I started to enroll in the astra G forums, and thanks to that I met a lot of people and some good friends, and things started to drop, like the radiCD, tires, the normal thing that we all do, with some cars and others

photo from 2012, do you remember those years? 18 years old, own car, girl, starting to discover life, hahaha, we would pay to have it again

But mine was soon twisted, due to a death in the family, my mother lost her mind, she got me to leave the cycle, the girl passed me, and other judicial things that do not come to the post, I had people from astra g that helped me a lot, which I started to know them

first official meeting, all astras and a corsa hahaha, my first meeting, with 19 years or so, that day was incredible


And as we all started by making changes, and the threaded suspension arrived, the biggest brakes, tinted windows, sound equipment, painting white headlights, VxR spoiler, between thing and thing we arrived at the present time, with its 20 years, with its 293k, greeting the 300k now, without having an accident with me, and always faithful when I need him

covid-19
The day before everything exploded in Spain, we spent a few days without being able to leave the house, and just before I could go to take some photos that would be marked, before losing total freedom

And for those curious about how it is with a threaded suspension I leave a couple of photos, with standard tires and 2cm spacers.

For those who follow me in the forum, they will know that I do not wear those tires anymore, that I go with semi slick and toyo t1r back


and little more to tell, thank you if you reached the end of the post, I hope you liked our story, if you have questions ahead, and at no time do you want to give the car an image of problems, just different, hence the lights were white and not blacks like everyone in Spain has been, I hope no one lives when my "dream" went wrong with everything on track, and I really wish you the best, to everyone who reaches the end of the post, and we greet each other at the roads.


This is all about that person, who at 16 told me "for a person with a child's body and an adult mind" and for my first girlfriend, wherever you are, forgive me for failing you, we looked married, and I failed you, Inna.