What have you done to your car today?

Joined May 22, 2018
·
3,182 Posts
That is a good idea. My JB Motors welded the tailpipe on my Tour back box (I thought I'd messed it up putting the Singapore tip on but no - just wear and tear corrosion) at no extra charge to the standard MOT. I do see C backboxes with blingy pipes going quite cheap but there'd be some work to Combo-ise them and you never know how rotten the internals might be. A cut and shut of the visually-good tailpipe onto the std box makes sense.

of photos that were already needed

Joined 11 mo ago
·
25 Posts
Fanged it hard with some low rev torque growl, I put that Liqui Moly fuel additive in it, low end torque the thing is off its guts.
They say that stuff is a scam no way man it just takes about 200k's to start kicking in, mega low end growling.
Im going to pull the gearbox pan and put a new gasket, on Z14XEP only way to drain Gearbox oil is to remove pan replace gasket.
So Im going to weld a nut with a bolt and copper seal washer so it can be drained like the Engine Oil.

Joined Nov 23, 2017
·
662 Posts
After searching for 7 MONTHS to find a spare wheel for a price I was happy to pay, the stars aligned in my favour. The cheapest I could find for ages a 5th alloy for my car was £236, Michelin PS4 usually with about 4mm tread and scuffage on the rim.

Then a motor parts guy in Bradford puts one on gumtree for £80. I jumped on it fully expecting a catch but "too good to be true" it wasn't. He mustn't have realised it's value because I'm now £80 lighter and I have a bargain spare wheel with an excellent tyre!! No more "puncture paranoia"!! 👍

The only thing that was necessary was that the original 2006 rear indicator bulbs - an advisory for the last five years straight - were finally removed and replaced. They were almost totally clear with rare flakes of orange left on them. Now, when I plip my remote, it's like two Donald Trumps mooning at me. Yes, it's taking some adjusting to.

Also, for those (both) of you who read my progress thread, the black D facelift 16s and the purple C Sri 16s have been sold and I'm delivering to buyers Tuesday (which is today - must get some sleep). I'm committed to the white-van/pink wheels "ice cream seller" look - or rather, their Michelin PS3s.

Joined May 22, 2018
·
3,182 Posts
Today was cold but not windy and raining like the past few days so I got up early and took the alloys and their summer tyres off the Focus and replaced them with the steel wheels and M+S tyres. As usual, a hydraulic jack and my 12V impact wrench made an unpleasant winter job quite bearable. I rotated the wheels from last winter and the fronts (were 33psi rears) were 30psi, which is spot-on for fronts but the old fronts now on the rear were 26psi and definitely needed bringing up to the recommended 33psi.

It already feels more stable even though roads are dry and I am likely drive back from the airport in ten days time when the weather could be anything so I'm glad to be off the summer tyres which don't like any road surface below 5C.

Joined Nov 23, 2017
·
662 Posts
I'd love a set of winters! All I've done recently is top up my pressures while they'd dropped a little due to it being freezing out!!

I have however just spent £19 (thanks Halfords trade card) on car cleaning stuff - bug/tar remover, 5L shampoo and some tyre shine!

Joined May 22, 2018
·
3,182 Posts
Well, I'm in Malaga now (for a week, but returning again soon). The drive to MAN was absolutely filthy, the worst I've had in a long time. TL;DR - thank goodness those skitty Rovelos were off and the M+S on. Even at 6:10am, the M61 was hellish busy and it was 06:40 as I passed your junction, Delta Romeo, and I was on 2x speed wipers (I really hope you weren't delivering in that) but not for the last time on my trip. All three lanes were 60-65mph; I hate that - like a fast traffic jam with no exit strategy for any pile up ahead. The M60 was mostly a crawl and it was well past 07:20 when I failed to see the totally faded sign for the airport parking offsite place.

I still walked into MAN just after 8 and got my plane no problem. Interestingly, no-one asked for my vac certificate, even in Malaga, and Ryanair didn't even check for the locator form and only glanced at my passport. To me, it kind of shows that once things are relaxed it's hard to put the genie back in the bottle.

The lack of airport checks is borderline scary!!

Joined May 22, 2018
·
3,182 Posts
An interesting experiment. I have booked a €24 antigen test at the airport before I fly but I have doctored my August test to read today's date. I half-bet no-one will ask to see it and, if they do, will glance at my "not detected, 14-12-2021" Microsoft Paint job and let me straight through. I absolutely guarantee no-one at MAN will check - AGP (Malaga) are usually a bit more serious but don't scan QR or anything like that.

Joined May 22, 2018
·
3,182 Posts
When the staff arrived at the gate, one of them was straight away going around checking locator form and negative test certificate and, because I was very near the desk, my docs were checked almost straight away. Perhaps arriving quite late at the gate going out is why I slipped through - I hope so (although more likely that Spanish employees are more fastidious, IME).

My expt was confirmed, though. The 'modified' doc was accepted on a visual check, no QR scanning. My lawyers advise me to repeat that I had a negative from the airport test centre that morning (and I'd done my own rapid antigen the day before, not that that's accepted) so I had fallback if she had whipped a scanner out. I wouldn't deliberately dodge (although I wasn't convinced by the airport test; it barely rubbed my nostril hairs.

It's not technically difficult to make it mandatory to upload onto the .gov locator form, which would automatically catch out such shenanigans, but they don't. Also, although you supposedly can upload the vac cert QR, it never ever works. Govt IT rarely does, for me at least.

Joined Jan 28, 2021
·
1,148 Posts
for Spain the pharmaceutical tests under tap water give positive, Spanish quality, the first to disappoint

Let's see if today it's time for interior detail or tomorrow

and because of the ps5 premiere keychain spiderman hahahaha 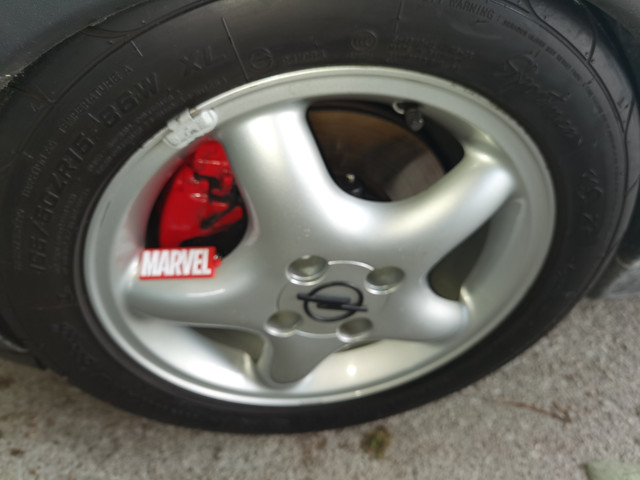 Joined Jan 28, 2021
·
1,148 Posts
well today in a flash stop at the usual scrapyard, thanks to an astra H donor the vrx opc pedals, that if lacking in love

and after giving him love and some beer

They are used, but with all the tires in good condition and the studs still unused, I did not know that the gas one was with the flat studs.

Joined Jan 28, 2021
·
1,148 Posts
they are common in Spain, I am the second couple I find, the first one I gave them to an ex-friend and he only thought of selling the car with them and not returning them to me, I use the sparco although I don't know if I should give them the change for being from origin, yours the gas pedal is different right?
561 - 580 of 595 Posts
Join the discussion
Continue with Facebook
Continue with Google
or sign up with email
About this Discussion
594 Replies
41 Participants
Last post:
jewels 16 d ago
Vauxhall Corsa-C Forum
A forum community dedicated to Vauxhall Corsa owners and enthusiasts. Come join the discussion about performance, modifications, troubleshooting, parts, maintenance, and more!
Full Forum Listing
Explore Our Forums
General Chat Your Corsa C Mechanical ICE, Electrics and Lighting Progress Area
Recommended Communities